The Lord of the Rings & The Hobbit – the concert 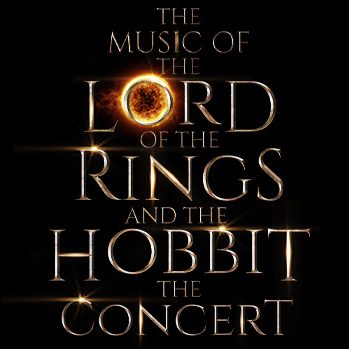 The fantastic world of hobbits and elves from J.R.R. Tolkien’s „Lord of the Rings“ comes as concert with symphonic orchestra and choir. In a two-hour evening performance, the legendary world of the Hobbits is brought to life in a unique musical event. From the threatening sounds of Mordor and the shrill attack of the black riders to the beautiful lyrical melodies of the elves – it will transform any concert hall into a musical setting of Middle-earth. Howard Shore, who composed the music for the film trilogy „The Lord of the Rings“ and „The Hobbit“, was awarded an Oscar for it. As with Richard Wagner’s „Ring des Nibelungen“, his leitmotifs let the audience feel in the flesh when the ring unfolds its power and corrupts the bearer of all power: A parable that fits perfectly into today’s age. The press celebrates „The Lord of the Rings & the Hobbit – the Concert“ as a „highly emotional and mythical experience“ and praises: „Nearly 100 actors – from the well-playing orchestra to the vocal Shire Choir to the outstanding soloists – showed their commitment to transport the audience into Tolkien’s world-famous fantasy world… Whether bombastic with timpani and gongs or elven-like delicate flute tones: The well-known, Oscarwinning melodies by Howard Shore from the film trilogy were heard again and again, immediately providing the right „cinema in the head“…. In the end, neither the audience nor the musicians held their ground on the chairs. The audience managed to get the actors on stage for three encores with standing ovations“. J. R. R. Tolkien John Ronald Reuel Tolkien (1892-1973) became world famous with his novel cycle „The Lord of the Rings“. Throughout his life he devoted himself to the ‚history‘ of his fictional Middle-Earth Empire. Not only George Lucas has visibly gained inspiration for his „Star Wars“ series. His stories also served as a model for many other works, whereby the remake of Peter Jackson in particular triggered a renaissance of the ring cult. In the movie trilogy „The Hobbit“ this was continued. Already early J.R.R. discovered his love for languages. Welsh, Old English, Greek, French and German belonged to his preferred subjects during his school education. After his mother’s death, Tolkien was raised first by an aunt and later by a foster family. From 1911 he studied at Exeter College in Oxford, graduated in 1915 and went to war in 1918. In 1925 Tolkien was appointed professor at Oxford University, where his idea for the „Hobbit“ was born. Originally intended as entertainment for his children and initially written without the idea of a commercial publication, the „Hobbit“ was presented by a former student of Tolkien to the publisher Allen&Unwin, who published the story attentively in 1937. Although „The Little Hobbit“ was not a bestseller, there were requests for a continuation of the story. From 1936 to 1949 Tolkien wrote „The Lord of the Rings“. The first two volumes appeared in 1954 – a cult was born. In 1973 Tolkien died at the age of 81. His son Christopher took care of the publication of further stories from Middle-earth after his death. About 25 years after his death, the production of the film trilogy „The Lord of the Rings“ began with a budget of 190 million dollars. It became one of the most successful film productions of all times.

The Philharmonic Orchestra of the shire inspires its listeners throughout Europe with its „unleashed desire to make music“ (press quote). The music of „The Lord of the Rings“ has been the main focus of this orchestra’s program for years. For several years the ensemble of the „The Shire Choir and Philharmonic Orchestra“ has successfully performed at the most famous opera houses and concert halls in Germany, such as the Alte Oper Frankfurt, the Gewandhaus in Leipzig, the Philharmonie München, the Philharmonie Berlin or the Laeiszhalle Hamburg. The musicians have always remained true to their most important premise: to authentically interpret the special flair of the Shire and Tolkien’s masterpiece in order to give their audience an unforgettable evening. Highest quality and continuity are guaranteed by the close cooperation with the the State Academic Symphony Orchestra of the Republic of Belarus, which was founded in 1927 as one of the oldest institutions of the Soviet Union. The Belarusian State Philharmonic Society, to which the orchestra belongs today, was founded ten years later. The State Academic Symphony Orchestra of the Republic of Belarus has always been one of the leading orchestras in the territory of the former Soviet Union. Some of the most sought-after soloists of the twentieth century, such as David Oistrach, Yehudi Menuhin, Vladimir Ashkenazy and Isaac Stern, have repeatedly accepted the invitation of this orchestra. In 1996, the famous Russian maestro Micha Katz was appointed chief conductor, bringing new impulses to the musical life of the country. Since September 2001, the internationally renowned conductor Yuri Karavaev has been in charge of the orchestra, which is one of the most versatile conductors of our time.

The narrator and singer of our past shows is Billy Boyd, who played „Pippin“ in the film trilogy. Beside the acting Billy Boyd works also as a singer, musician and composer. He plays some musical instruments like guitar, bass and drums and sings both, baritone and tenor. In „The Lord of the Rings: The Return of the King“ he sang the song “The Edge of Night” (in the stage play The Steward of Gondor). He also composed and sang the song “The Last Goodbye” for the conclusion of the Hobbit trilogy „The Hobbit: The Battle of the Five Armies“. William (Billy) Boyd was born in Glasgow in 1968. His parents died when he was very young and he grew up with his sister Margaret with his grandmother. Before his training as an actor he worked as a bookbinder for several years. He completed his training with a diploma in Dramatic Arts at the renowned Royal Scottish Academy of Music & Drama, where Alan Cumming and James McAvoy studied among others.

He made his first television appearance in 1996 in an episode of the Scottish television series „Taggart“. He then appeared in several television productions and played numerous stage roles, most notably at the Royal Lyceum Theatre in Edinburgh, including William Shakespeare’s „The Merchant of Venice“ and „Much Ado about nothing“ and Émile Zola’s „Thérèse Raquin“. He became known to an international audience in 2001 for his role as the Hobbit Pippin in Peter Jackson’s film adaptation of the „Lord of the Rings“ trilogy. Since then he has been featured in „Master & Commander – To the End of the World“ alongside Russell Crowe and in several English cinema productions.

The idea to found the Danish Tolkien Ensemble and the complete musical interpretation of the poems and songs from the legend „The Lord of the Rings“ came from the composer Caspar Reiff. Caspar Reiff was the first composer to receive permission to set the poems and ring verses to music 25 years after Tolkien’s death. Together with the Danish guitarist and composer Peter Hall they divided the poems from The Lord of the Rings into different genres. Lyrical songs by elves and people and folkloric songs attributed to hobbits, dwarves and bombadils were created. The ensemble interprets the songs and poems partly in a classical style and partly in an Irish folkloristic style. In addition to the contemplative Elven songs and the atmospheric festive Hobbit songs, there are also some melancholic ballads.

Howard Shore is one of the most important composers of film music ever. Among his incredibly versatile works are the settings of „The Silence of the Lambs“, „Philadelphia“, „Seven“, „Panic Room“ and „The Aviator“. The long-standing collaboration with the Canadian director David Cronenberg, for whom he wrote, among others, the music „Die Fliege“, „Naked Lunch“, „Spider“ and „A History of Violence“, plays an important role in his work. His most famous work, however, is the music for Peter Jackson’s „Lord of the Rings“ trilogy. Only through Shore’s sophisticated leitmotif technique, for which he intensively studied the „Rheingold“ by Richard Wagner, the films reach their dramaturgical depth. For the music to „Die Gefährten“ Shore received his first Oscar and a Grammy. In 2004 he received a Grammy, two Golden Globes and two Oscars, and in 2005 he received two Grammys again for the third part of the trilogy. In 2005 Shore received the Golden Globe for the soundtrack to „Aviator“.

„…Fascinating how the spark ignites at this concert. … And not only real Frodo disciples should get their money’s worth with so much well-done entertainment. …And lo and behold, the Gewandhaus becomes Middle-earth.“ Leipziger Volkszeitung „Nearly 100 performers – from the well-playing orchestra to the vocally strong Auenland Choir to the outstanding soloists – showed their commitment to bring the audience into Tolkien’s world-famous fantasy world… Whether bombastic with kettledrums and gongs or elven-like tender flute tones: Again and again the well-known, Oscar-winning melodies by Howard Shore from the film trilogy sounded, which immediately provided the right „cinema in the head“…. In the end, neither the audience nor the musicians held their seats. The audience managed to get the actors on stage with three encores with standing ovations“. Westfalen-Blatt

„The mood, anyway, was great, a lot of incidental applause. At the end there was a standing ovation and a full, danceable encore package – the Aegi audience celebrated, clapped and cheered as if they were finally back in the Shire after some bad adventures. The evening was fun.“ Neue Presse

„You will witness an elaborate production. … The choir and the orchestra play the soundtrack with great force and passion, while the vocal soloists provide lyrical moments. … The ensemble is rewarded with standing ovations.“ Osnabrücker Zeitung

„A highly emotional and mythical experience not only for die-hard „Lord of the Rings“ fans was the live concert of the probably most famous saga in the world…. The tension and romanticism of the powerful sound creation with echoes of Wagner’s operas or Orff’s Carmina Burana was perceptible at all times and always provided goose bumps – and plenty of applause for the artists.“ Allgemeine Zeitung

„The audience was thrilled. The Gollum song was especially well received – and of course the original compositions of Hobbit actor Billy Boyd …“ Mainpost